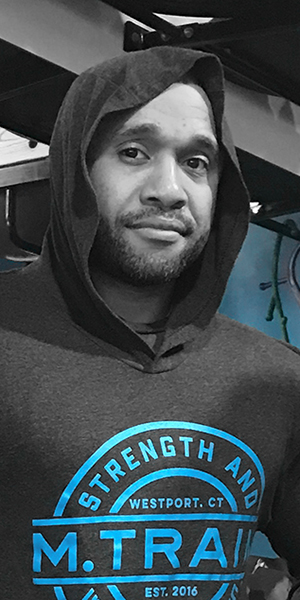 Matthew McDonald, a Fairfield, CT native, began his football career at the age of 7 playing Pop Warner Football. By High School, he had earned the respect and admiration of his fellow players with his leadership skills. During off-seasons Matt would organize and conduct summer mini-camps to help his fellow teammates prepare for the next season. Matt also achieved success on the Power-lifting Team and the Indoor Track Team. Additionally, Matt worked with many of the Special Education students, teaching them basic health and fitness concepts.

Landing an academic scholarship to Marist College, he was recruited to play Div. 1 AA Football. During the off-season, he would conduct mini-camps for his teammates and assist with their power lifting/conditioning programs. Matt would speak to the young at local schools regarding leadership, self-esteem, self-motivation, and health & fitness education. He become the first African-American Captain of the football team, leading Marist to their first MAAC championship victory. Matthew received the highly acclaimed Coach’s Award of Excellence during his time at Marist. These experiences, along with his love of sports, set the stage for his career as a teacher, coach and fitness specialist.

Matthew found his way back to Connecticut where he begin training clients full time at the Fitness Edge. There he achieved Master Level status and used his talents as a teacher and trainer, along with his football knowledge, to become one of the most sought after trainers for young athletes. Matt trained high school and college age athletes to prepare them for the upcoming challenges of summer football camps and pre-season play. He also developed a unique training style to accommodate clients with special medical needs, such as Parkinson’s disease, Lupus, and many others.

Now, as the co-founder of M.Train Fitness Studios, Matt continues to search and development new techniques in the world of health and fitness, creating simple, challenging, and ever-evolving systems that produces amazing results.